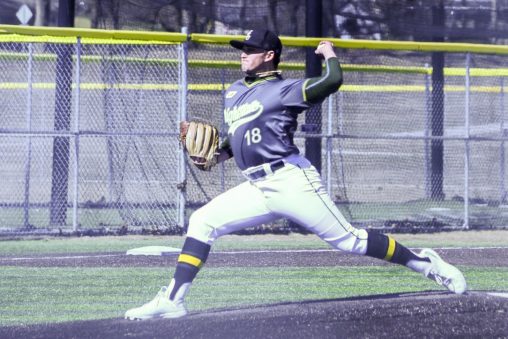 Casey Grimm threw his first no-hitter for the Lake Campus Lakers on April 25.

Graduate student Casey Grimm pitched a no-hitter and struck out 16 batters in leading the Lake Campus Lakers to a 10–0 victory over Roosevelt University in Peoria, Illinois.

Grimm said he tried not to think about the possibility of pitching a no-hitter as the innings piled up during the April 25 game.

“I knew it was happening and I just kind of took a big deep breath,” he said. “It all hit me at once. It was pretty awesome.”

The rare baseball achievement was a tonic for Grimm, who had Tommy John reconstructive elbow surgery at the end of his sophomore year, was forced to redshirt his junior season, and had last season end prematurely because of the COVID-19 pandemic.

“This season is a statement year for me with all of the hard work I have put in,” he said.

Grimm earned his bachelor’s degree in business at Wright State and is currently working on his Master of Business Administration with a concentration in marketing.

“I want to get into the business world in marketing,” he said. “I’m pretty good at communicating with people.”

“He is gritty and a hard worker,” Wendling said of Grimm. “I love his ‘can-do’ attitude.”

Grimm’s only other no-hitter came in high school, but he threw two one-hitters his freshman year at Wright State. Then came Sunday at Peoria, the final game of a three-game series against Roosevelt.

“I felt pretty good that day,” said Grimm, who would throw 124 pitches in the game. “My fast ball was working pretty well. They had a lot of lefties in the lineup, so with me being left-handed I was throwing my slider a lot.”

Grimm said that by the fifth inning a few of his teammates probably realized he was pitching a no-hitter, but they stayed silent.

“The baseball superstition is you never say anything,” he said.

By the bottom of the ninth inning, Grimm had thrown well over 100 pitches.

The first Roosevelt batter grounded out to second. The second hitter struck out. The third batter, who had hit two home runs the previous day, flew out to center field. Grimm had his no-hitter and the celebration was on.

Head baseball coach Chad Geier said Grimm is the hardest worker on and off the field he has ever witnessed in all of his years of coaching.

“The amount of work that Casey puts in on a daily basis is unmatched,” said Geier. “I really hope he gets an opportunity to play at the next level because the sky is the limit for him. But regardless if that opportunity is available or not, he is going to do big things in his lifetime. When his last pitch is thrown this year, it will be the toughest moment of the year for me.”