Circular hedge-lined plots set with golden medallions to celebrate historically Black fraternities and sororities and serve as a gathering place is planned for the heart of Wright State University’s campus.

Wright State is believed to be one of the first predominately white public universities in Ohio to create such plots, which will be in the form of a plaza. It is designed to represent the National Pan-Hellenic Council (NPHC), the umbrella group for nine historically Black Greek letter organizations.

Wright State held a groundbreaking ceremony for the plots, which will be in a grassy area near the “Turning Points” sculpture and outside University Hall, on May 20.

Donations to support National Pan-Hellenic Council Memorial Plots at Wright State can be made online.

Adrian Williams, former president of the Student Government Association who graduated in May, said that in the early 1900s many African Americans were denied a full college experience, including unable to get internships or join student organizations and clubs.

The plots are also designed to underscore Wright State’s commitment to inclusion and present an educational and cultural opportunity for students, faculty and staff. 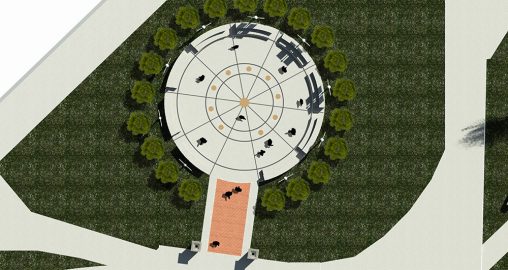 Wright State held a groundbreaking ceremony for the National Pan-Hellenic Council Memorial Plots on May 20. (Video by Kris Sproles / photos by Erin Pence)

“My goal isn’t to stay at Wright State forever, but my goal is to create something that will and serve its purpose here at Wright State,” said Dai’Shanae Moore, Wright State NPHC president and member of Sigma Gamma Rho Sorority, Xi Xi Chapter.

The plaza will be 42 feet six inches – or 510 inches – in diameter to reflect the 5/10/1930 date of the founding of the National Pan-Hellenic Council at Howard University. Seating around the edge of the plaza varies in height from 19 to 37 inches to represent the year the council was incorporated in Illinois in 1937. The paver entry to the plaza will be nine feet wide in tribute to the nine fraternities and sororities.