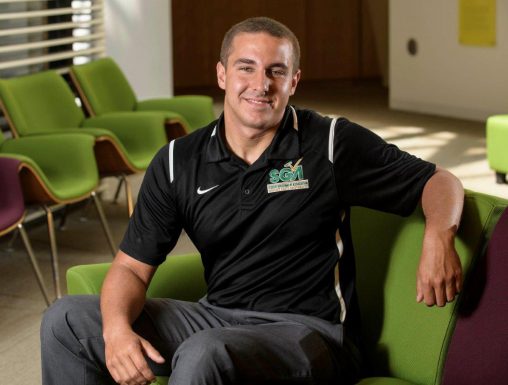 Lukas Wenrick, a senior majoring in social science education and president-elect of the Student Government Association, hopes to pursue a career in higher education and perhaps run for public office. (Photo by Erin Pence)

It was an early lesson in self-sufficiency. Lukas Wenrick saw his parents get laid off from their jobs when he was a freshman in high school.

Going to college suddenly became a question mark for the Anna, Ohio, teenager.

“It was a little bit of a hard time, and they made it clear to me that I was going to have to pay for my own education,” Wenrick recalled.

So at age 15, Wenrick began mowing grass and worked on turning the job into what would become a successful landscape company.

At the same time, he excelled in the classroom and on the field, becoming captain of the football team and graduating in 2012 as valedictorian of his class.

Today, Wenrick is president-elect of the Student Government Association at Wright State University, preparing to help host the first general election presidential debate and hoping for a career in higher education and perhaps run for public office.

“I really wanted to be a high school teacher — math or social studies,” he said. “And I wanted to coach some students.”

Wright State was the perfect fit for Wenrick. It was close to home, but not too close. The cost of attending the university was affordable for someone working his way through school, and he received some scholarship money for being a valedictorian. It also had a strong education program.

Wenrick knew he had made the right choice his first year, when he had a professor who had left Harvard to teach at Wright State.

Wenrick hopes for a career in higher education in the area of policy reform or student affairs. Public office could be part of that.

“I have a passion for education, and there is a lot of reform that needs to be done in Ohio as well as the national level,” he said. “I would really love to lobby on behalf of the people who need it the most and make sure every child has the same opportunity for education.”

Even though Wenrick has come a long way, he has not forgotten his “roots.”

As co-owner of LNS Mowing & Landscaping in Sidney, he and his brother — a Wright State sophomore — oversee six independent contractors.