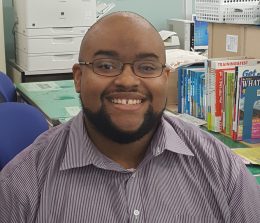 After earning a Teaching English as a Foreign Language certificate, Tyler Chilton now teaches English to schoolchildren in Japan.

When he was a young boy growing up in Cedarville, Ohio, Tyler Chilton became fascinated with Japan and the idea of living there, intrigued that one of his favorite video games was inspired by Japanese and Western mythology.

Today, the Wright State University alumnus is living that dream, teaching English to Japanese schoolchildren in Shibata, a rice-growing coastal region in the heart of Japan and home to a castle that dates back to the 1500s.

“At first I was very afraid of becoming a teacher,” said Chilton. “But while earning my Teaching English as a Foreign Language certificate at Wright State, I learned that I didn’t have to be afraid. Seeing the students faces light up when they say ‘Hello!’ or ‘Good morning!’ to you is such a delight that it never gets old. Their excitement is contagious and addicting, so I’m happy to stay for a few more years.”

Chilton graduated from Cedarville High School. His father worked as a supply chain manager at a Navistar International Corp. in Springfield. His mother was employed by Vernay Laboratories in Yellow Springs as a laboratory technician. Both received their bachelor degrees from Central State University and are now retired.

“I feel as though a person who comes out of Wright State with a degree in international business has the most diverse potential out of any of the other business programs,” said Chilton, adding that graduates are prepared for jobs in human resources, marketing, logistics and other areas.

While at Wright State, Chilton took three years of Japanese. “Without those classes I wouldn’t be where I am today,” he said.

Chilton also joined the Japanese club, where he became the student government representative for a year and then president.

After earning his Teaching English as a Foreign Language certificate in 2014, he participated in the university’s student ambassador program, which sent him to Japan for a month.

He graduated in 2015 and in 2016 was hired by a Japanese-English teaching company called Interac. He was placed as an alternate in what was his first choice — the Japan Exchange and Teaching Program (JET), a Japanese government initiative that brings college graduates to Japan as assistant language teachers in K-12 schools.

The hiring process for foreign English teachers in Japan can take months and even years.

“You essentially have to be flexible enough to put your life on hold when looking to teach in Japan, at least in some capacity,” Chilton said. “That being said, I am more than grateful the JET program has given this opportunity to me. It got me to where I wanted to be, and it is one of the few times I feel as though I will ever experience hard work so perfectly transitioning into equal reward.”

Chilton teaches between three and five classes every day and at a different school each day, so he sometimes only sees the same students once a month.

In between classes, he prepares for the next lesson, studies Japanese or talks to his coworkers. At the end of the day, he attends an English club meeting with some of the students. They often practice for speech contests or debate competitions.

When Chilton first arrived in Japan, he was living in Sapporo, Hokkaido, which is in the northern-most part of the country.

“I really do love Hokkaido, but because it’s pretty much a separate island from the mainland, there were times that I felt kind of trapped,” he said.

Chilton has since moved to Shibata and has access to anywhere on the mainland through public transportation.

On Chilton’s time off, he likes to socialize with other foreign teachers, help out with events at the local cultural center, explore the area’s sights and go to a local hot spring.

“I’m a hot-spring fanatic and luckily for me Japan is chock full of hot springs,” he said. “They’re super cheap and very relaxing. It’s always fun finding a new one because each one feels different. It`s probably a good thing I don’t have a car this year because I would probably go to one every day.”

Chilton said the Japanese are respectful to everyone and everything, including the elderly and the environment.

“I can’t seem to find a trash can anywhere outside, and yet everywhere is so clean,” he said. “They take the time to separate their trash into sometimes four and five different categories so that each can be recycled more efficiently. It shows respect towards the environment and towards the employees at the garbage disposal plants.”

“There’s a process to almost everything here, and it needs to be followed to the T,” he said. “If you aren’t willing to follow it, your life will be very difficult in Japan. You can change it, but change happens at a very slow pace here, so analyzing a situation quickly and starting the process of the change as soon as you can while preemptively anticipating the problems is extremely important.”

Chilton plans to continue teaching in Japan for two more years. After that, he would like to pursue a career in the video game industry. He hopes to work for a Japanese video game company like Square Enix, Platinum Games, Nintendo, Capcom or Aksys.