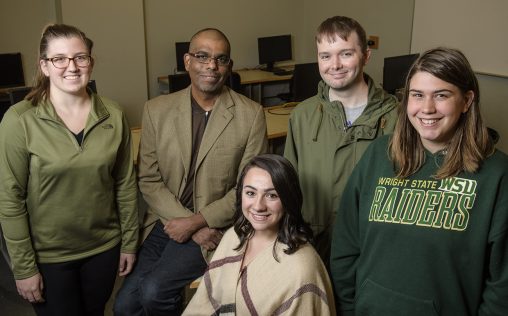 From left: Sarah Conard, Ray Marcano, Madison Smith, Max Milligan and Kristin Baughman are part of the team working on the Poverty Project, a class effort to to put a human face on the region’s poor as well as to chronicle the causes and effects of being destitute. (Photos by Erin Pence)

One student spent more than six hours interviewing a subject. Another rode along with a police officer all night as he patrolled the streets. A third listened to the riveting account of a man who vomited death-black blood all over his bathroom walls as his liver began to fail.

It was all part of the Poverty Project, an ambitious initiative by students in Wright State University’s Advanced News Writing class to put a human face on the region’s poor as well as to chronicle the causes and effects of being destitute.

The project is the brainchild of instructor Ray Marcano, who teaches the class along with adjunct faculty member Ken Paxson. Marcano clawed his way out of poverty growing up in the Bronx and climbed to the highest rungs of the journalism profession.

“I wanted to give my students something this semester that had more substance and was challenging for them and would not only teach them about an issue but teach them something about themselves,” said Marcano, an award-winning reporter and editor who had a long career with Cox Media.

Marcano said that when people think about poverty, they generally just think about the lack of money.

“They don’t think about everything else that’s associated with poverty — drug problems, crime problems — all of the things that happen that keep people in poverty,” he said. “We’re trying to peel back the layers as best we can and bring that to light.”

About 25 students are in the class, all of whom hope to go into journalism, public relations, multimedia and related fields.

Marcano said many of the students were at first intimidated by the project, unsure of how to approach it and not confident they could produce in-depth, professional-quality stories.

“I think it was an important subject to try to tackle, but it seemed daunting to try to do a good job in such an overreaching, large issue,” said Max Milligan, of West Chester, a student reporter on the project. “I was definitely intrigued, but also probably fearful.”

The students brainstormed together and came up with a list of story ideas for the project — everything from how illnesses, accidents, drug abuse and even student loan debt contribute to poverty. Reporting, editing and other duties were split up among the students and stories assigned.

One story revealed pockets of poverty in the region, some of them in otherwise affluent neighborhoods. Another story profiled a 74-year-old retired autoworker who thought he would have a comfortable retirement until a catastrophic illness left him virtually bankrupt. Still another described the experience of a man who was badly burned in a gasoline explosion as he was clearing brush and is now on Social Security disability.

“It’s been incredible,” she said. “Even though I’m not the one reporting, I’m learning so much. I think it’s a really special project. It’s pushed everyone.” 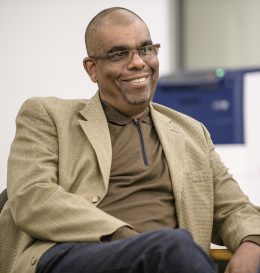 The Poverty Project is the brainchild of communication instructor Ray Marcano, pictured, who teaches the class along with adjunct faculty member Ken Paxson.

“Many of these students — before they came to this class — had never even written an essay,” he said. “They have begun to learn skills I think are going to serve them in life as they go forward — interviewing, calling people they don’t know to ask for an interview, writing in a way that is clear and concise.”

The stories have been posted on the project website.

Madison Smith, of Urbana, is in charge of social media on the project, posting links to the stories on Facebook and Twitter.

“Social media is ridiculously important,” she said. “It’s my job to get people to our website to read the stories.”

Some of the stories have also been posted online by the Dayton Daily News, which has also published excerpts in print editions.

“That was also part of my thinking,” said Marcano. “How can I not only make this educational for the students, but how can I make it a value-added proposition for a local media company so that they might consider running it?”

Sarah Conard, editor-in-chief of the Dayton City Paper, is managing editor of the Poverty Project.

“I think what we accomplished is we brought light to something most people don’t want to know about or talk about,” she said. “I think we really found a way to bring it into people’s eyes.”