It was a bold move for a sixth-grader. Stephanie Patino-Garfias, the only Hispanic student in her class, marched into the principal’s office and asked if she could introduce the Dayton school to Hispanic Heritage Month.

Told yes, she ended up singing the National Anthem in Spanish before her schoolmates and performing a traditional Mexican dance. That would start Patino-Garfias down a path that has since led her to become an activist in the areas of immigration, social justice and human rights.

Today, the Wright State University student is in the middle of a 2017 Newman Civic Fellowship, a prestigious national program that seeks to develop a new generation of leaders who can build relationships and bridge differences to address inequality and polarization in the nation’s communities.

The yearlong fellowship runs through the end of spring semester, and each Fellow is assigned a mentor. Patino-Garfias’ mentor is Michael M. Parks, president of The Dayton Foundation, which provides expertise, resources and support for important initiatives in the region.

Parks introduced Patino-Garfias to an immigration attorney and she has since worked with refugees to help them understand their legal rights.

“I know a lot more about the immigration process than I did before,” said Patino-Garfias. “That is the best thing that could have happened to me.”

She has met with immigrants from Guatemala, El Salvador and the former Burma, now known as Myanmar. One of the projects through her mentorship was an outreach effort to migrant farmworkers in Ohio. She actually accompanied an immigration attorney into the fields and spoke to the farmworkers about their legal rights.

Patino-Garfias later created her own outreach program and went into the schools to talk about immigration rights. She also gave a “Know Your Rights” presentation to immigrants at the Mexican consulate when it held office hours in Dayton. 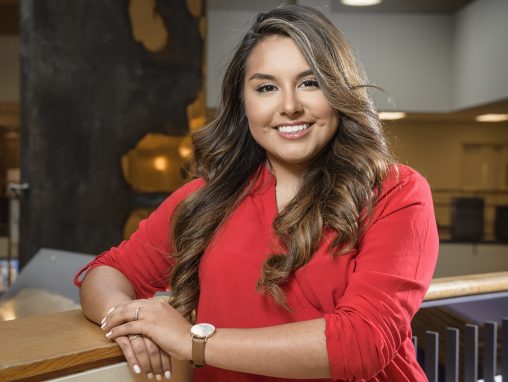 As part of her Newman Civic Fellowship, Stephanie Patino-Garfias has worked with refugees to help them understand their legal rights. (Video by Kris Sproles / photo by Erin Pence)

“It was pretty great,” she said. “I met very like-minded people who are also doing work around the nation on helping others. So I think one of the most beneficial things of that conference was being able to collaborate with others, being able to connect with others that are doing the same work that you are.”

For example, Patino-Garfias met a student who helps people write letters to Congress and a student who has been raising money for hurricane-ravaged Puerto Rico by talking about the issue in the schools.

“That is what impacted me and my work because I was able to bring all of that back,” she said. “I now have a different perspective on outreach and how I want to do that with the community.”

She said the secret to bridging differences is “having conversations, being able to sit down and realize that we all have a lot in common.”

When it came time to go to college, Patino-Garfias initially looked at out-of-state universities, but then “something hit me.” She realized she wanted to stay close to her family, Mexican immigrants who had come to the United States two decades earlier and eventually settled in Dayton. And when she visited Wright State’s Office of Latino Affairs, that clinched it. She became a Raider.

“I felt at home. I felt like I belonged. I felt like I had people who could relate to me — like-minded people,” she said. “So I stayed. And I think it was the best decision I could have ever made.”

When she was a freshman, Patino-Garfias worked with the College of Liberal Arts’ Department of Political Science and the Office of Latino Affairs to raise money for the families of 43 students from a teachers’ college in Mexico who were kidnapped in 2014 in Iguala, Guerrero, Mexico, and are feared to have been killed. She met with two of the family members when they were hosted at The Ohio State University and gave them a $1,000 donation that had been raised in three weeks at Wright State.

Patino-Garfias said Wright State is a special place because the faculty go out of their way to help their students and “listen to what you have to say and what your dreams and aspirations are.” Her mentors have supported her projects and were there to answer her questions or find someone who could.

Patino-Garfias has studied abroad in India and Morocco, where she helped feed Syrian refugees. She is majoring in political science and international studies with a minor in Arabic. She carries a 3.9 grade point average and is scheduled to graduate in the spring.

Patino-Garfias has an internship with the Ohio Bureau of Criminal Investigation and hopes to get a job with the crime lab after she graduates.