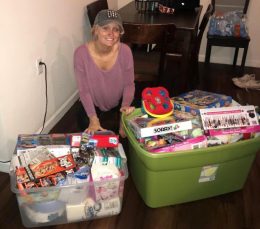 Kinsey Adkins collect toys and other items for children at Michael’s House, a Fairborn organization that supports children who have been victims of abuse, as part of her First-Year Seminar course.

The pivotal moment for Wright State University freshman Brooklyn Wolfe came as she and her friends had finished helping provide meals for the homeless in downtown Columbus.

Wolfe was handed a roll of trash bags and asked to distribute them.

“They are used as closets for the homeless. That is where they keep all of their clothes and hygiene products,” she said. “As I walked up to the homeless people individually, seeing how grateful they were just for a trash bag broke my heart.”

The pivotal moment for fellow student Luis Alomar came when he volunteered at BOGG Ministries, a Miamisburg nonprofit that provides food, clothing and other essentials to the needy. Alomar and his family had been helped by that very organization when he was a child.

“I felt like not only did they benefit from it, but so did I,” he said. “I explained to the people at one point this was me, so I understood what they went through.”

These “pivotal moments” were the sudden realization of how desperate the need can be among the poor and the homeless and how even the smallest generosity can make a huge difference.

The moments were a byproduct of a UVC 1010: First-Year Seminar, a course for incoming first-year students. The course is designed to help them quickly connect to campus, make friends who become part of a support system and give them the tools for academic success.

But Joyce Winters, an academic adviser who instructs a seminar for pre-nursing students, said it teaches the students more than just how to succeed.

“These students are beginning their higher educational path by learning to advocate for themselves and others, be accountable for their success and become people of action,” she said. “It is important to encourage them to be self-reflective and develop a value system that will support their academic and personal goals, especially in the field of health care.”

The students’ final project fall semester was to select an organization to support in the form of volunteer hours, donations or projects. The students had to show how the organization benefited from their service and what the students gained from the experience.

The students volunteered at places such as Miami Valley Hospital, the Humane Society, the Ronald McDonald House and other organizations.

Kinsey Adkins volunteered at Michael’s House, a Fairborn organization that supports children who have been victims of abuse. Not only did Adkins collect toys and other items for the children, but she also got family members and businesses to do the same. 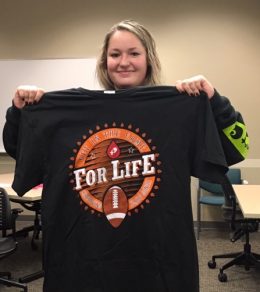 Halie Harner decided to become a first-time blood donor, at the Community Blood Center in Dayton.

“I hope this is just the start for me on donating and volunteering to not only kids but to adults and elders that are in need of help,” she said. “This project was very eye-opening to me and easily one of my favorite projects throughout my school year.”

Halie Harner decided to become a first-time blood donor, at the Community Blood Center in Dayton. She said the best thing about it was getting “that phone call” later from the blood center.

“The phone call tells you that you saved someone’s life today,” she said. “Doing this project taught me to put others needs before my own. I really had no time to donate, but this project made me make time to help some one’s life.”

Kalynn Rose donated time and raised money to help find a cure for ALS, a devastating neurodegenerative disease that had afflicted her grandfather. Allison Armstrong helped start a Bible study group at the Brethren’s Retirement Community in Greenville.

Winters said she was really impressed by the sustainable impact the project had on the students and the organizations they served.

“Most were genuinely surprised by the difference they made and how much they enjoyed the experience,” she said. “They found that even though they thought they ‘have no time,’ they now want to make giving back an ongoing priority.”

Wolfe, who volunteered at Under the Stars to help the homeless in Columbus, plans to increase her volunteer activity.

“This experience was so eye-opening and truly taught me that I can make a difference in the world and that I can inspire others to do the same,” she said.