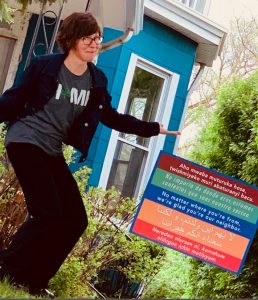 Teaching English has given Teresa Troyer a magic carpet ride to more than a few foreign countries.

The Wright State University double-degree alumna has taught English to university students and professors in China, Indonesia and Turkey, to teens and K-12 teachers in Honduras, and to teachers in Colombia. She also taught in Slovakia.

“I feel alive when I am abroad,” said Troyer, adding that her favorite experience was the year she spent in Colombia. “Being able to take our children, who were 9 and 11, to live in Bogota for a year — much of which consisted of flying around the country to conduct workshops for English teachers — was something I dreamed of doing as a young person.”

Troyer grew up in Howard, a tiny community about 50 miles northeast of Columbus. She graduated from East Knox High School in 1990 as valedictorian of her class.

“I had always wanted to be a teacher from the time I came home from kindergarten to teach my younger brother through third grade, when a classmate told me I would be a good teacher,” she said.

Troyer got a taste for teaching abroad just as her career was getting off the ground.

After earning her bachelor’s degree in creative writing and art history, Troyer joined the Peace Corps to teach English in the central European country of Slovakia. When she returned to the United States, she began teaching high school in the Bronx and completed her teaching credentials.

Troyer later enrolled at Wright State, attracted by the Teaching English to Speakers of Other Languages (TESOL) Program offered by the Department of English Language and Literatures.

Those in the program include international students and English-speaking American students who want to teach English. Many graduates teach at high schools and universities. A few are hired by international business executives in the United States as tutors. Others find employment overseas.

“I made friends — both peers and professors — whom I still count on for ideas and discussion and inspiration,” said Troyer, who was a teaching assistant in the Composition and Rhetoric program.

Troyer said Wright State professors were open with their personal educational backgrounds and professional interests, which helped her learn more about her own best paths forward. 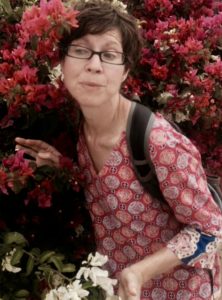 Teresa Troyer was attracted to Wright State’s Teaching English to Speakers of Other Languages (TESOL) Program.

“They were also generous with their time, and this led to several mutually beneficial collaborations,” she said.

After earning her master’s degree in composition and rhetoric with a TESOL certification in 2003, she joined the staff at Dayton Public Schools to lead the district’s English Language program.

Troyer returned to Wright State to pursue a master’s degree in education, graduating in 2010.

She has taught university students and professors in China, Indonesia and Turkey in summer programs connected to The Ohio State University. She volunteered for three summers in rural Honduras, teaching English to teens and professional development for K-12 teachers of English.

Troyer was also selected as an English Fellow through the U.S. Department of State, focusing on professional development in multiple English-teaching situations in Colombia for the 2015–2016 academic year.

As the English language secondary lead teacher for Dublin City Schools, Troyer focuses on instructional goals, organization and strategies for students in grades six through 12.

“This new job has brought me back to teaching and challenges me to structure student to student and teacher to teacher interactions in different ways than my previous responsibilities allowed,” she said.

Troyer is an enthusiastic hockey fan when she’s not working.

“I bang vigorously on the glass and yell at my sons’ hockey games,” she said. “My goal is to learn to skate well enough that I can play select other parents — those who also cannot skate.”